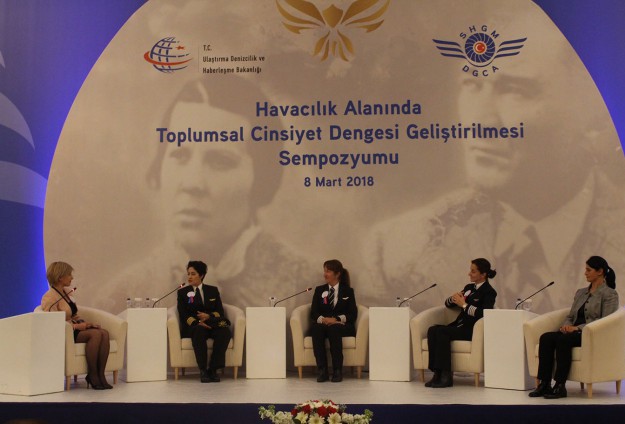 If Women Soar, Turkey Will Soar!

Women of Aviation Flying Supersonic and Flying in their Careers gather at a symposium, held by Directorate General of Civil Aviation (DGCA)  in Ankara, with the aim of fostering  gender balance in aviation.

DGCA organized a symposium themed on “Development of  Gender Balance in Aviation” on March 8 in Ankara to celebrate the “Women of Aviation Worldwide (WOAW) Week”. Organized by the Gender Balance Fostering Commision (GBFC)  of the DGCA, a DGCA initiative that leads the shift to a gender-balanced aviation industry where men and women will thrive in harmony and parity, the symposium was held under the motto of “Let Women Soar!” with the attendance of women of aviation who play a role with their efforts across the aviation industry.

Delivering the Keynote Speech, Mr. Bahri Kesici, Acting Director General of DGCA, said that March 8th does not refer to the International Women’s Day, only, but also an important day for the aviation industry, and emphasized that Barones Raymonde De Laroche, the first woman pilot of the world, obtained her pilot license on March 8, 1910, and that March 8 is recognized as the “Women of Aviation Day”, and the respective week as the “Women of Aviation Worldwide Week” parallel to the Institute for Women Of Aviation Worldwide (iWOAW).

Underlining that the principle of equality has been regulated extensively by means of the constitution and the laws, and that the concerned governmental bodies should take their part to make the principle of equality real, Mr. KESICI, indicated that they promulgated the “Instruction on Development of Gender  Balance in Civil Aviation” for such purpose, blazing a trail in this field.  Mentioning about establishment of the Commission for GBFC of the DGCA in line with this instruction, Mr. KESICI emphasized that the said commission is a first in Turkey, and that it will carry out initiatives and projects to monitor the gender balance , to generate solutions to develop such equality, to create equal opportunities for both genders in selection of occupations in the field of aviation, and in particular to encourage women to education and training in the aviation-specific fields.

Mr. KESICI indicated that a disproportionate breakdown is predominant between women-men employees across the aviation industry, and that these figures clearly reveal why more systematic efforts should be made to develop ” Gender Balance ” in civil aviation, and continued his speech with a quotation from Gazi Mustafa Kemal Ataturk which reads as “If a society fails to walk arm in arm with all its women and men towards the same target, it is not technically possible and scientifically probable for such country to develop”.

As part of the activities organized under a different theme every year for the week covering March 8th under the coordination of iWOAW, headquartered in Canada, this year’s theme was determined as “supersonic flight of women” in the memory of the first supersonic flight operated by Jacqueline Cochran with a Sabre jet borrowed from the Royal Canadian Air Force in 1953.

Accordingly; the first panel, titled “Women of Aviation Flying Supersonic”, of the symposium was held upon attendance of women captains and pilots serving at various airline companies. During the panel leaded under the moderation of Ms. Tulay TUGLUER, Senior Consultant at Aircraft Department of STM-SSM (Undersecretariat for Defense Industries), Ms. Ayse Ebru TOKA, Captain Pilot for Boeing 737 at Turkish Airlines, Ms. Leyal SEMERCI and Ms. Burcu SAHINKAYA, Captain Pilots for A 320 at Freebird, and Ms. Meral ER, Pilot for Boeing B737, attended to deliver their speeches, and shared their experiences. 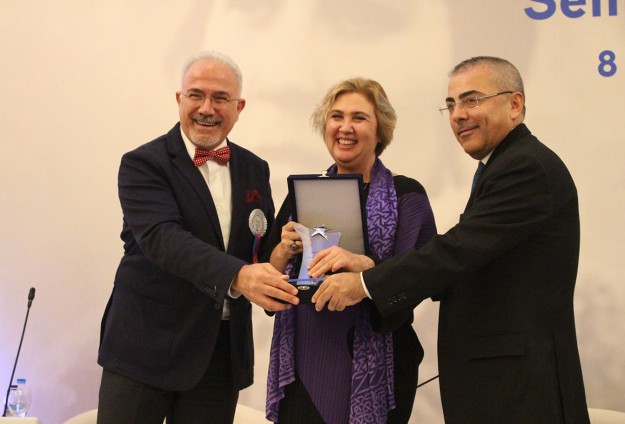 After  the first session of the symposium, Ms. Seda BAHADIR DURSUN, Expert at DGCA, also delivered a presentation about the results of her thesis, “Women’s in Turkish Civil Aviation”…

Women of Aviation Flying in Their Careers…

The second session, titled “Women of Aviation Flying in Their Careers”, of the symposium gathered some women with successful careers in aviation industry. During the second panel leaded under the moderation of ‎Assoc. Prof. Dr. Ferhan KUYUCAK SENGUL, a Faculty Member of the Faculty of Aeronautics and Astronautics – Anadolu University; Ms. Canan Celebioglu, Chairperson of the Board of Directors of Celebi Holding, Dr. Nurhan OTO, Deputy Head Manager of Esenboga Airport of the DGSAA, Ms. Buket TOPEL, NDT & Special Process Quality Manager at TAI, and Ms. Gaye BETUL Dogan, Head of Air Navigation Department at DGCA and Vice Chairperson of Eurocontrol Safety Regulation Commission, attended to deliver their speeches.

Ms. Emine DANIS, Dispatcher, who prevented a potential disaster by notifying the captain pilot of a problem she noticed on a private aircraft which was about to take off from Bursa Yenisehir Airport, was granted with the “Woman Contribution of Women to Aviation Safety” Award by the Commission for GBFC of the DGCA.

After the closing speech delivered by Ms. Ozgu SARIUNAL, Head of Industry-Specific Regulation and Training Department at DGCA, plaques were presented to the women of aviation, who provide their contributions to development of the aviation industry, in remembrance of the organization…

It is aimed that the associations, institutions and organizations included in the national aviation ecosystem under the leadership of DGCA Commission for GBFC will maintain and traditionalize similar activities and events with different themes under which the professionals, who play a role with their efforts in development of our national aviation field, and who contribute to development of gender balance in aviation, can share their experiences and women of aviation can share their upward career stories, as well as their suggestions to women who intent to rear up in the field of aviation.

We hereby announce the foregoing to the public.

There are four female pilots to “have flown supersonic” for the first time across Turkey. After graduating from the Air Forces Academy in 1996,

started to fly supersonic in 1998 when they were at the stage of “F-5 Operational Characteristics” at the 3rd Main Jet Base Command as part of the piloting training processes. 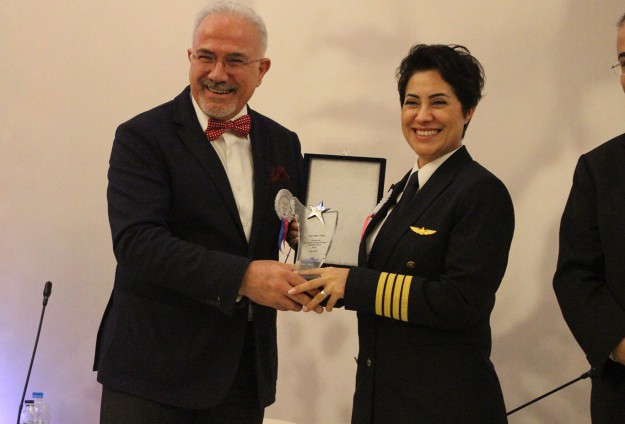 As of the first quarter of 2018; the percentage of women employees;

Percentages of women employees by occupations:

What you can read next 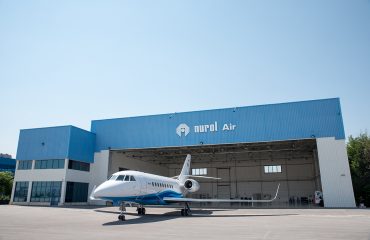 DGCA to organize events to develop gender balance in aviation… 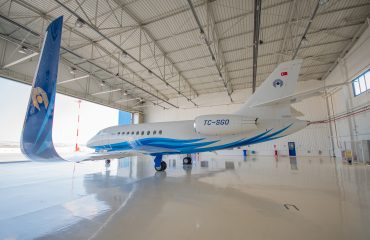